This is a Post Mortum for my submission to Ludum Dare 39 Compo.
TL;DR : Happy with concept, game design, sounds, music and mood. Need to improve drastically on my art for Ludum Dare 40. 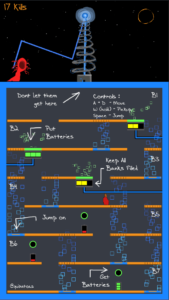 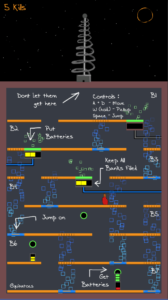 The Ktharns have caused an eclipse! Your solar cells powering the Electron Lance are offline and there’s an invasion approaching! You are done for… but not like this… you don’t have to die quietly! Stock the backup powerbanks with the used batteries from storage and give the Ktharns the hell they deserve!

I woke up at 4am (I’m on BST), two hours after the announcement of the theme for Ludum Dare 39. ‘Running out of Power’ was one of the themes from the final round that I was most interested in despite having not come up with any idea prior to the announcement.

I wasn’t able to sleep after finding out the theme so I spent the next hour coming up with the main concept behind what became Not Like This… (web play here) while lying in bed. After this hour I came up with a loose screen design on my white board : 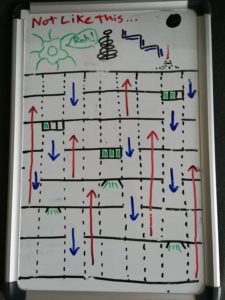 It took me the next 5ish hours, til about 1pm on day 1, to get the main mechanics up and running. This is for the playable portion of the screen which takes place in the basement of the powered tower. While there were a few things I needed to tweek, there were also some unintentional things that i opted to keep. One of these was the gravity lifts requiring a nicely timed jump to get to their full hight. I was quite enjoying playing at this point.

One of the errors I made at this stage was not focussing on the main character art. I was just using a coloured rectangle for him at this time. I took a bit of an extended break, for 2 and a half hours, before starting on the top part of the scene where the tower and the aliens would spawn.

I spent 2 hours a piece on the art for the top part of the screen and then sorting out the spawning of aliens, just off screen on either side. I had no troubles with these bits though the art for the background could do with far more polish!

For the rest of day 1 I worked on the tower shooting mechanic. I got lost down a bit of a rabbit hole trying to figure out how to get each point in the laser fire to go either side of a straight line. My highschool maths was failing me there, so I dumped that idea and tried to go with some good old Random.value. I ran a loop to add points to a LineRenderer. That probably cost me a couple of hours to get the below code in the end, which actually does a better job making a line look like electric than I think my maths-professor version would have produced anyway.

I got a solid 7 hours of great sleep that night so woke up super refreshed and ready to begin day 2. At 6am I tweeked a couple of mechanics that made the game possible to lose. I had to increase the timings between enemy spawns, decrease the tower’s shot detection radius based on the amount of charges available in the supply banks, and also change the way the enemies moved so that their speed remained constant throughout their life. I also added a Kills counter to add purpose to the game.

Then came a good 3 hours of designing the characters for the game. 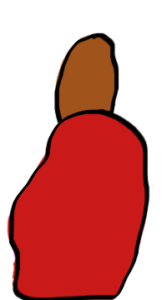 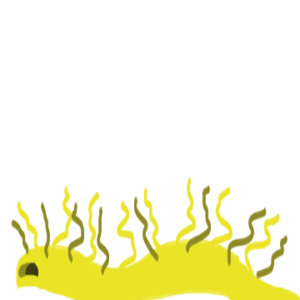 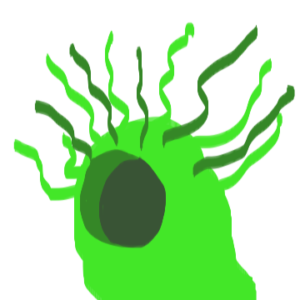 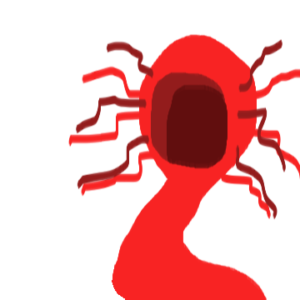 I’m very happy with the characterization of the aliens while also keeping them minimal, but I am appalled at the main character! Part of the reasoning I didn’t go back and make him better is because I decided to draw him first, so psychologically I still had a GameOver screen to make, Music and SoundFX to create, the other characters and a story before I could submit.

My worries were unfounded though as the gameover screen and SFX took next to no time to create (bfxr is AMAZING!). Implementing the sound through my EventManager took a little bit of time but as it was a pretty zen monotonous activity it gave my mind a little rest. Next up was music which I was pretty confident I could get out in around an hour or less. All in all I’m super happy with the sounds and music. My favourite are the laser and alien roar sounds!

Suddenly, most of the game was finished, I just needed to create some kind of story-world setting. I originally wanted to do a whole scene where there was a phonecall between the main character and some external person where they tell him that the Ktharnians have created an eclipse to knock out the power of the defense towers but this was like fetch: Not going to happen! A short brainstorming gave me the idea to do it as a sort of soliloquy from the main character spoken in speech bubbles. I think this, coupled with the music achieves the mood I was going for. All in all the character only says these short lines:

NO! The solar cells… Dead. An Eclipse? No. An Invasion! Not like this… … Well, i’m not going down silently. If I stock the backups I can teach these Ktharns how to die. Let’s go!

All in all I had a great time making Not Like This… I’m super happy with the concept and mood, I also think it’s quite a fun game too. Though I’m really happy with the alien characters (even though I’m now realising how Marlboroic they all are…), my art in general is not a strong point.

Here’s the time breakdown from my toggl report: 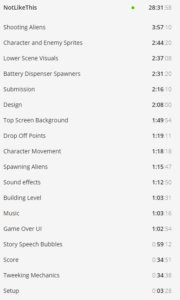 You’ll need a keyboard and a web browser to play, but it’s as simple as clicking on this link and hitting play : https://quixatocs.itch.io/not-like-this

If you happen to be an Ludum Dare 39 participant, then I’d love to know what you think over at the games page : https://ldjam.com/events/ludum-dare/39/not-like-this

Otherwise all feedback is welcome on this post also 🙂