This is a Post Mortum for my submission to Ludum Dare 41 Compo.

TL;DR: I was really happy with the idea of the mechanic. I was constantly worried that the game was too difficult and would result in a lot of frustration. This is quite a tough thing to get a good handle on without testers during a Jam. Besides this however, I think this is my most well rounded jam game yet with a bit of a pinch of salt given to the art. 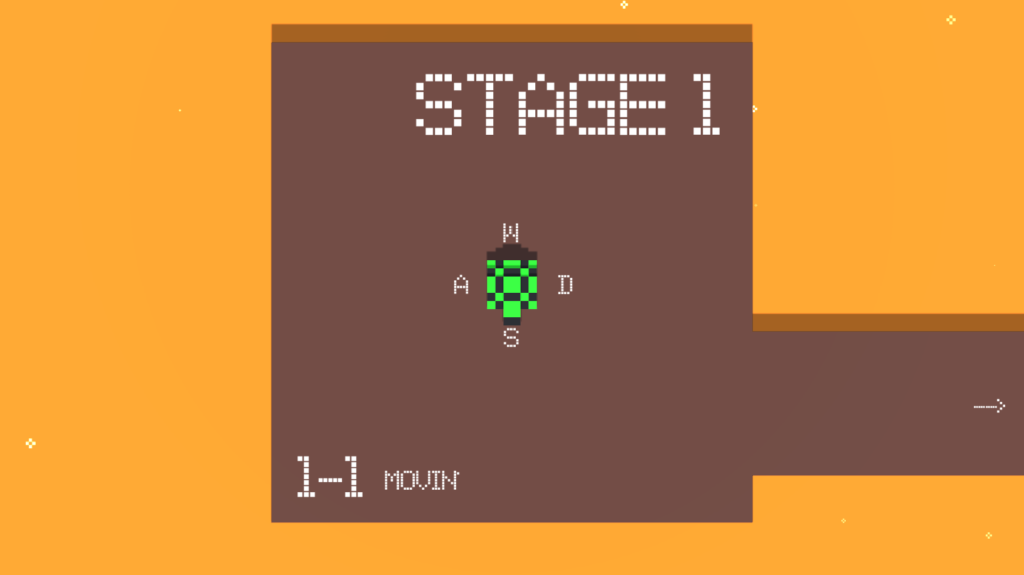 Sqwink doesn’t know how he got there, but he’s in the middle of an active volcano. On top of that he seems to be in the wrong game. Help this little Lava-Turtle get back to his home in this Top-Down Platformer.

I have recently started a new job so was still in the stage of coming home super tired after work for this Ludum Dare. I was potentially not going to run this time and was thinking of leaving it up to the theme to decide. Differently to last time, however I was a bit more ready to go with the flow of the theme. The one thought I did have before the show was to try and get some level design into this entry as it’s something I’ve been wanting to do more of for a while.

I woke at about 4am and check the theme of Combine 2 Incompatible Genres. I really felt like this would be a tough one but would probably produce some really innovative games. I lay in bed thinking about this one and almost went with a remake of my LD39 submission (Not Like This…) but play more towards the tower defence top part of the screen. While I was thinking on how I’d do this I actually just thought maybe I could do something different with the platforming aspect. A bit like Super Paper Mario where you traverse via 2D a 3D world.

So after a bit of project and Git setup I started working on the character movement and jumping. I’m going to say right now that these are the worst aspects of the game. The movement is really laboured and a bit unintuitive on the jumping. This has been matched in the comments on my LD entry page.

I then wanted to use the light as a way of giving you clues about the 3D space and then design puzzles solely around this mechanic. Here is an example of the light casting a shadow profile onto the floor of the steps you need to jump up. 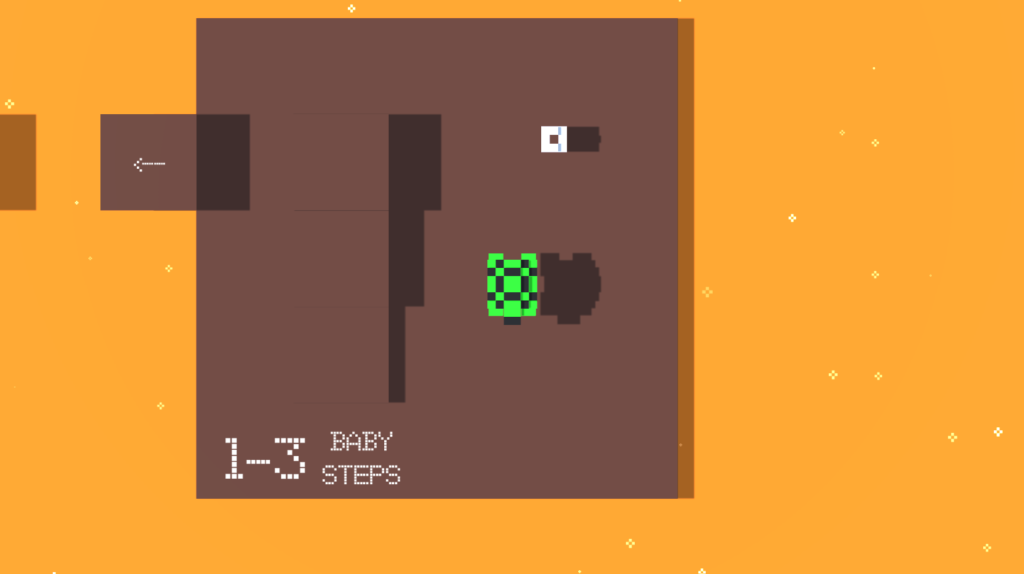 I intended, and was happy to, have spent the rest of the morning getting the tutorial stage aimed at introducing the jump and timeskip mechanic. My aim was to make the difficulty such that you’d get those Eureka-esque moments without the game becoming frustrating.

If you haven’t played the game yet you may want to before looking at the next image as it shows the level from an isometric perspective, so is in effect a level spoiler 😉

I really really really love games that do the title and tutorial text as occupying physical locations in the game. It’s not a new thing at all but I like it so I did it. I’ve tried it in the past with both of the previous submissions to Ludum Dare but I think this one worked as it wasn’t too crowding for the player like in Not Like This…

Once I’d worked on the tutorial level I did a bit of work on some particles to give the lava a bit of character. It was well into the evening before I started on Level 2. This is where I hit my first major stumbling block. When I designed the crossing paths stage I thought it’d be a piece of cake to do moving platforms. Just get the character on top of it and the collider will just take you with it right?! Not so! Non-Unity devs just skip ahead a bit as this gets a bit Unity-centric. Turns out you have to add a massive amount of friction in a physics material to get it to act correctly. Then you also have to move the rigid body with the MovePosition method.

I ended the first day with 2 levels that I thought weren’t too difficult save for stage 2-1 which I called Crossing Paths.

Here’s a spoiler for level 2 in the isometric 3D perspective :

And the Toggl report for day 1 : 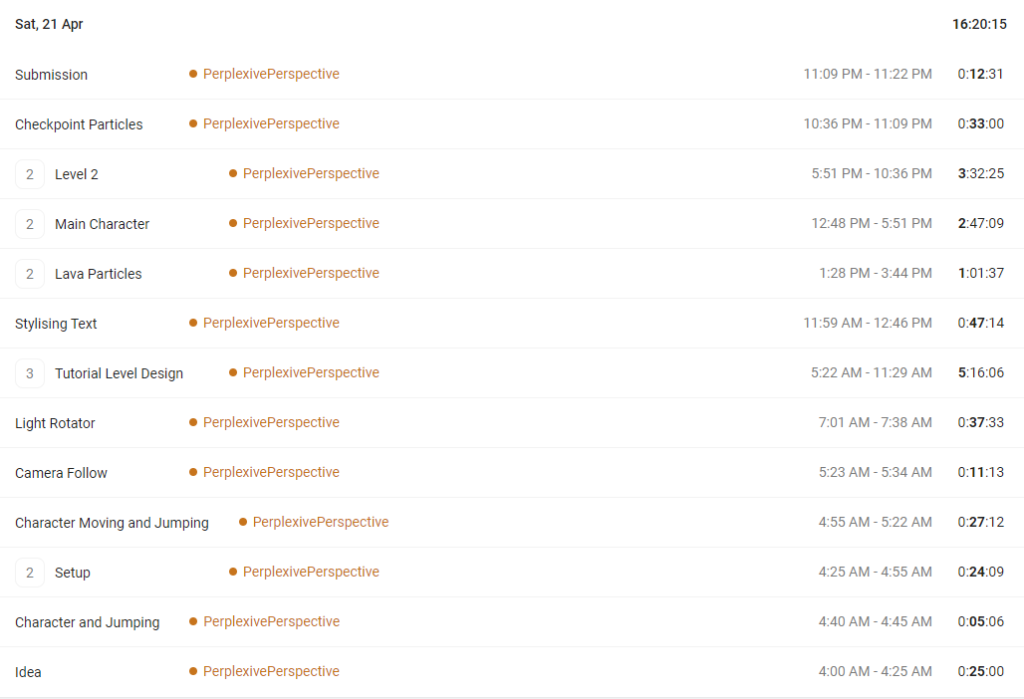 Day 2 started with plugging away at stage 3. Helix, which ended up being level 3-3, was originally going to be the puzzle which was later replaced by 1-3 Baby Steps. That was looking way too hard at that point so I think moving it to later in the game payed off.

I was into the afternoon by the time I’d finished stage 3 with an ending part to round off the experience. By that time I really needed to get onto doing some sounds. I was a bit resigned that I wasn’t going to be able to get any work in on the art but I thought some nice slowish music would fit the character and the viscous lava. I have never had a chance to use the audio mixer in Unity, and I’d come across the snapshot feature. The Audio Mixer snapshots allow you to set specific mixer settings and then flip to them from within your code. I quickly wrote some ostinato-lead music that could build through the addition of more stems to the musical texture. This had the effect of adding more saturation to the music and can be seen in many games. Notably recently in the Divine Beast Dungeons of The Legend of Zelda : Breath of the Wild. (The music there is particularly stunning). Here though, I was able to trigger the snapshots as Sqwink hits certain hidden colliders in the game. I was really happy with the music in all. Sounds didn’t take too much longer as there actually wasn’t that much I needed to create for. Just some Voice sounds at the start, a jump sound and a time skip sound. Though… I forgot to do the time skip. So it’s just a soundless feature that seems to have had it’s soul ripped from it despite it being the main feature of the game.

Here’s the time report for day 2 :

Once again, check out the game first before looking at the spoilers below 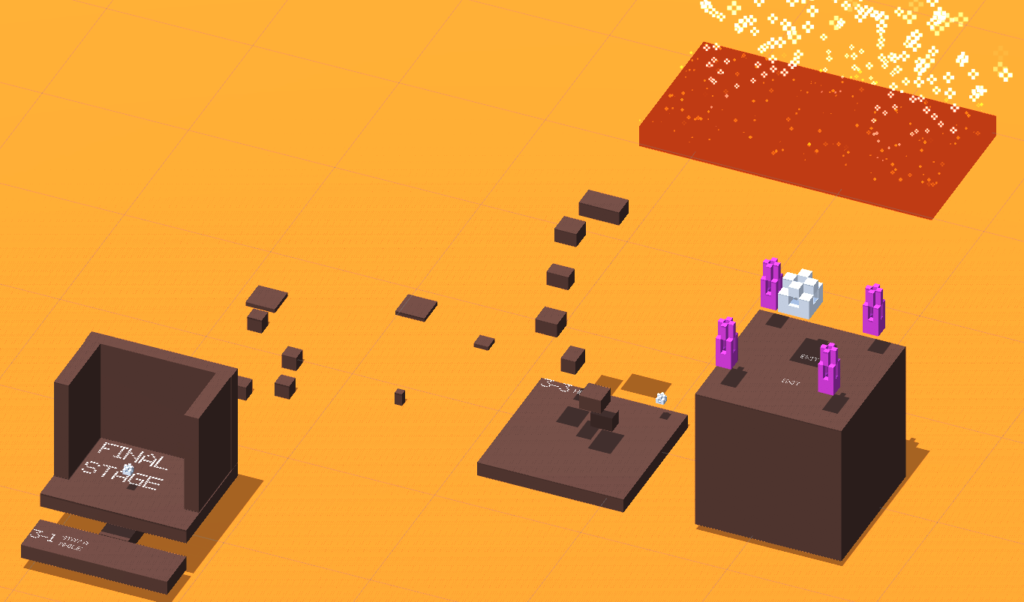 All in all I’m very pleased with this game. I think I hit a decent place on the continuum between too easy and too hard that affords Eureka moments without being frustrating. Hopefully the results match up.

So please go check out the game over at : https://quixatocs.itch.io/perplexive-perspective

And if you entered the jam then let me know what you think over on the submission page : https://ldjam.com/events/ludum-dare/41/perplexive-perspective