This is a Post Mortum for my submission to Ludum Dare 40 Compo.

TL;DR : Generally happy with how I did in this one. Was aiming to improve on the art and music of this from last time and felt ok about that. The game is not, in my opinion as fun as my last entry : Not Like This… 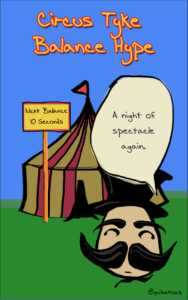 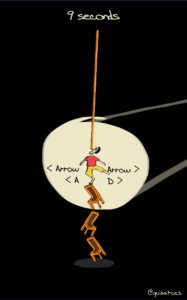 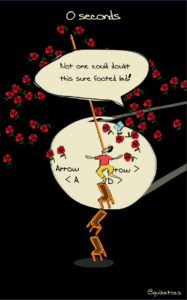 Roll up, Roll up, people I vow, we have a spectacle on right now!
BALANCING TYKE be aware, One man, three chairs, and a pole fair!
Can we make his job one tougher, By adding time this task is much mucher!
Tyke, a man unfeared of doom; Though, you’ll see yourself very soon!

For this Ludum Dare I’d had a bit of a rough previous week so I wasn’t feeling super motivated going into friday night. I’d checked out the themes earlier in the week and had been whelmed by them in general. Mostly because I was worried about what to actually make for any of them.

I woke up around 4am GMT, checked my phone for the theme : ‘The more you have the worse it is’. Well this was one of the ones I had hit the + on in the theme voting but I still didn’t really have any idea what to make. I was planning to lie in bed and just come up with something and if I fell back to sleep I was just gonna do what I could with the time after I woke up. Strangely though, I got this idea of someone hyping up a show and then the show falling flat. The idea having thought back to a time in school when a friend and I hyped up our rock bands performance in a competition so much that it was pretty hilarious when we went onstage with one amp (for 2 guitars and a singer) a MASSIVE amp for the solo guitarist, and a rhythm guitarist that was fox-orgy levels of out of tune.

So I had a setting of some type of show and it took me a few more mins to come up with the balancing mechanic. Summing those two ideas together gave me a circus boss hyping up his newly recruited balancing protegé. Rather un-Pilkingtonningtonly (Karl Pilkington) I then came up with the name, Circus Tyke Balancing Hype.

My negativity from the week had been removed by that pithy title so I immediately got up, opened unity, initialised a new git repo and started working on the main mechanics to make the pole tip over semi-randomly. This took me about 25 mins with the rest of the first couple of hours spent sorting out player input for re-balancing the pole from it’s random movements.

From last time I had analysed that the art was my weakness and so I was trying to focus more attention onto the visual and audio polish that I would put on the game. It was around this point that I can see (from looking back at my timesheet) that I put the first efforts into how the game would look. For example, I knew I’d want Tyke (the balancer) to be himself balancing on top of some chairs. So I needed the center pivot point of the whole chair-player-pole system to wander from the centre when the pole goes off balance :

The red lines above show a possible balancing position for the system with T being Top, P being Player, and F being Floor.

Following on from working on this movement strategy for the system I began work on the main character for the balancing scene. I wanted to make sure this guy looked much more than the garbed potato that I managed in LD 39. I quite liked the black line details I and the sketchbook nature of the style so I tried to carry it through to all the other designs used in the game. Here is Tyke in character next to his faithful chair: 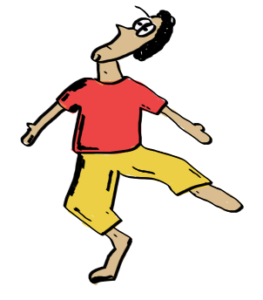 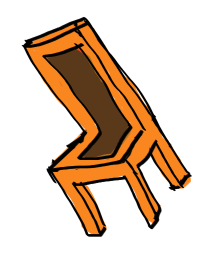 Am most proud of this popous looking salesman : 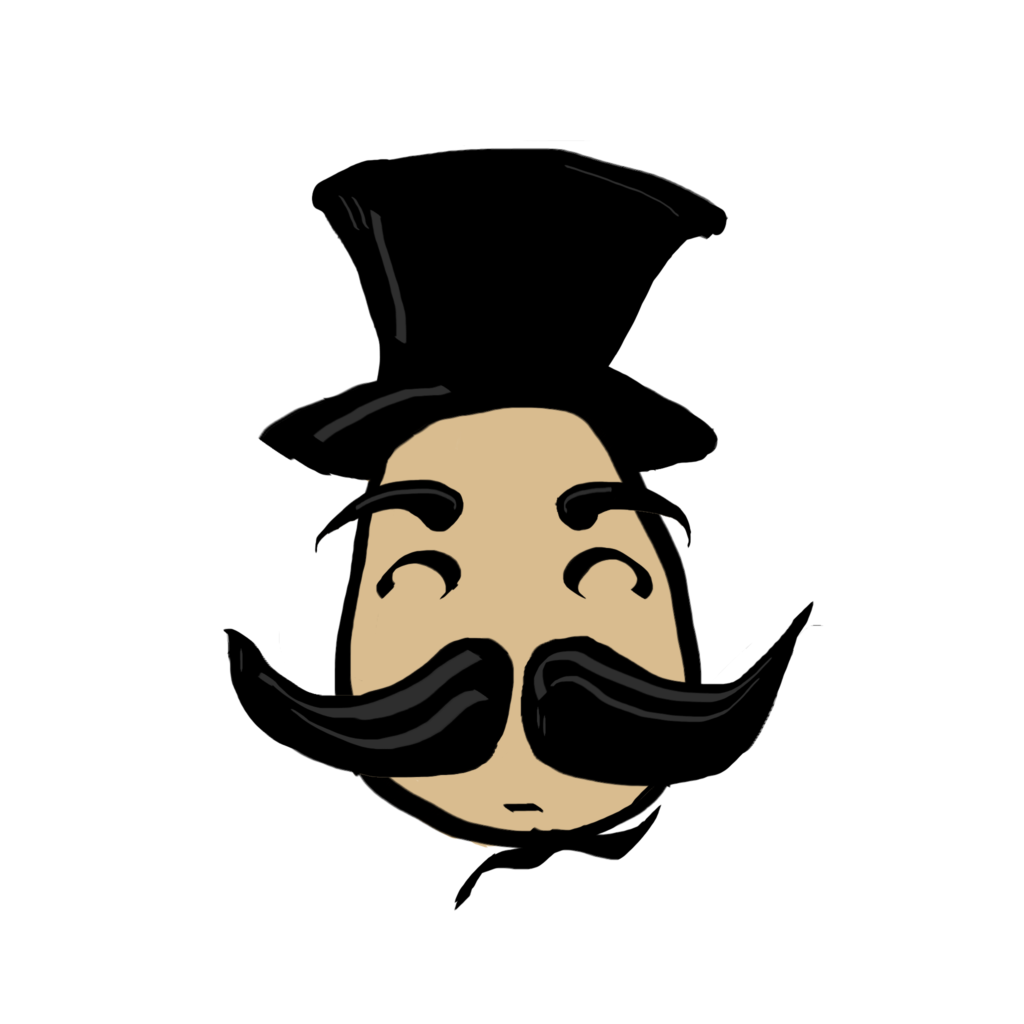 The focus for the rest of the afternoon and early evening was clearly on the artwork as I worked from 6am til 5pm solid on mostly art with just one hour-ish off for lunch and another couple of hours working on success and fail code in the unity editor. I spent the rest of the day working on the opening scene where the boss was going to spout hyperbole for the potential crowd. I made the bosses speech lines into rhyming couplets which I felt added a lot of flavour to the personality of the boss. It’s quite easy to do this in unity too with their [System.Serializable] annotation on classes (it should be a struct below (ooops)), this allows you to just add the new text in the editor. Coupled with a bit of random selection it’s then very easy to add more lines if I were to bolster the bosses, bank of ballads too :

The rhyming couplets speech use is a much better execution of speech story elements than I used in LD39 and I was pleased with this. It was also huge fun writing some of these couplets which affords a welcome break in the day. Some of my favourite lines :

Shall we afford the chronographs,
With yet more time and thus more laughs.

Shall we raise the time some more,
For greater risk of face meets floor.

And the tag line for the game:

Balance long, balance hard, or face the fear of face on yard!

My timesheet from day one looks like this, a lot of time spent on the artwork : 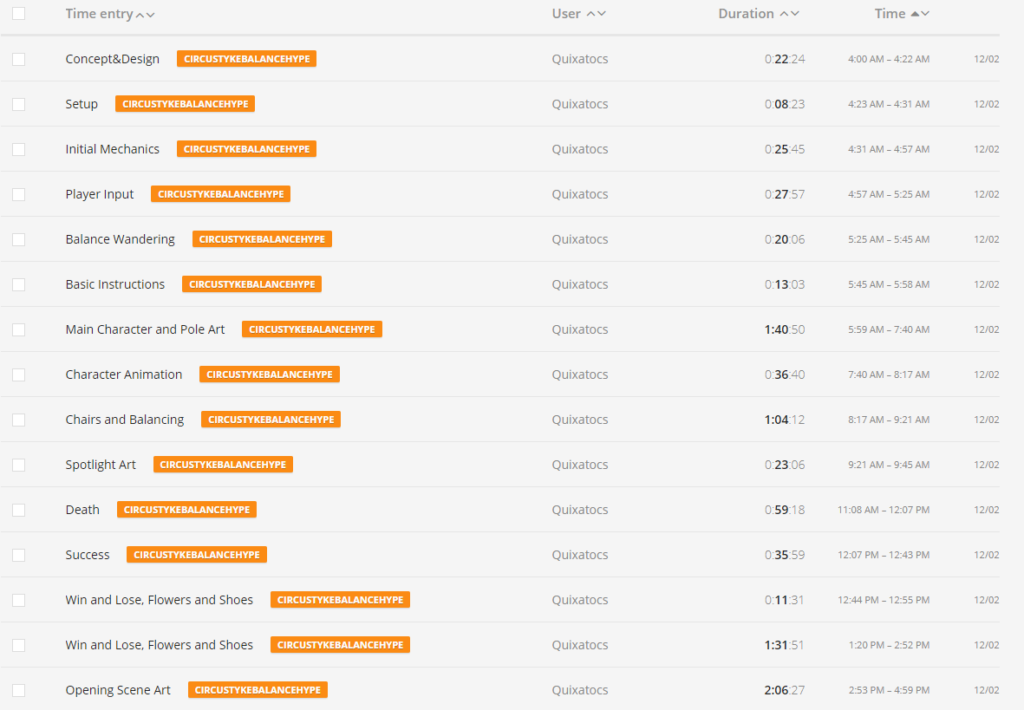 I felt pretty good about the first day as I was quite happy with the look of the game and had a plan for the rest of the next day.

I had an amazing sleep on the Saturday night and was able to wake up feeling pretty refreshed at 6am on the Sunday morning. I finished off the main text portion of the opening scene and began working on the music. 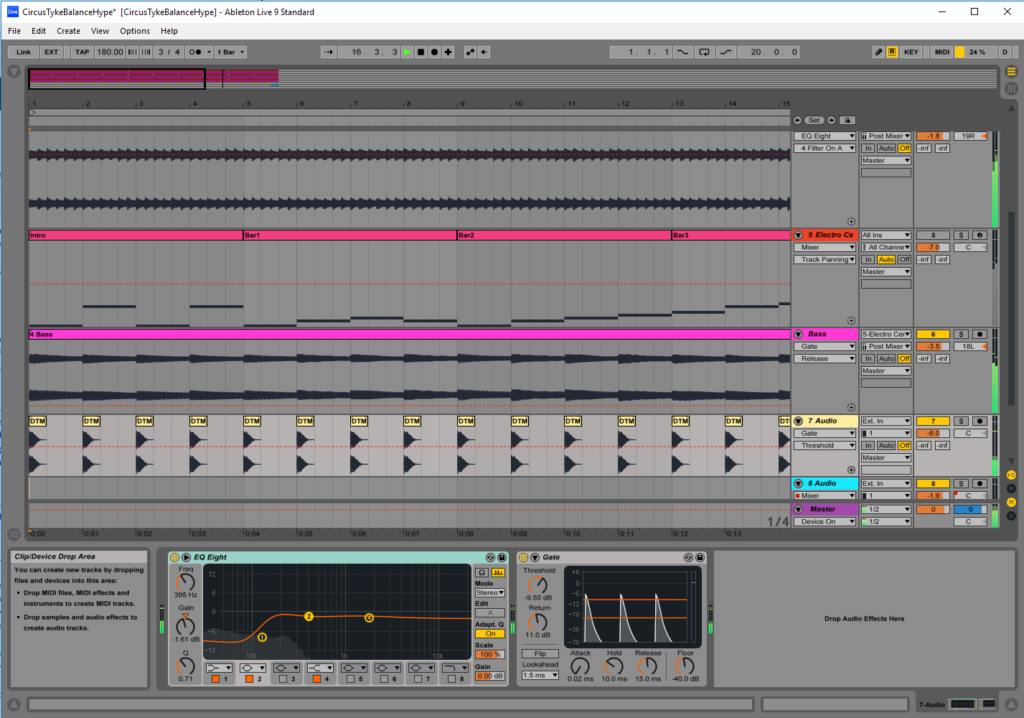 I had in my head exactly the kind of pastiche music I was going to make and knew exactly how to produce it as well. The idiomatic accordion ‘oom-pah-pah’ in the rhythm (lightly tweeked from the dark world music from Zelda : A Link to the Past) and the chromatic musicbox-like upper melody with a bit of bass. Not too much thinking involved there and it was a fun little project to up the mood of the opening scene.

For the balancing scene I’d thought of having a constant drumroll going off while you balanced and I actually implemented this first off but really didn’t think it worked as when the balancing would be going on in a show the audience would be quiet. So this gave me the idea to have the music for that scene just be, in effect, some good old cageian silence (with a little help from the croud). This had the added effect of giving the player some warning that they are about to fail the balancing act. I think it’s these kind of two-birds-with-one-stone designs that really make something elegant and I was lucky to stumble on this through my process of failing at my initial drum-roll idea.

After some quick bits of between-scene polish I got my housemate to test it out. The biggest piece of feedback was that they wanted to click through the text. So I needed to add a quick skip button to the opening scene. I threw that in pretty quickly and then started doing all the related banner resizing admin that comes from submitting on the Ludum Dare website and hosting your game on itch.io. I completely have no problem with this as it’s really nice to just relax and just reposition some art in photoshop.

All in all I was very happy with the look, feel and sound of this game. My biggest criticism I think is that the game is far too easy, and this was mirrored in the feedback comments on my submission. The players have got it spot on in my opinion. I also feel like I didn’t really challenge myself very much in regards to Unity. While I’m by no means the best developer or coder, I did enjoy learning a new technique in LD39 which I didn’t do in LD40. Though this did come at the benefit of the polish of the game. Guess it’s really just a spectrum and you just have to pick an end. I think, because of this, next time I’ll have a go at either something completely new in Unity, a technique I’ve never done, or a different engine. I’ve seen a couple of really stunning entries made on the PICO-8 Fantasy Console which I think I might have a go at. Check out The Lost Strawberry and Mushroom Delicieux , other entries which were made with PICO-8.

Here’s Day 2 of my Toggl report: 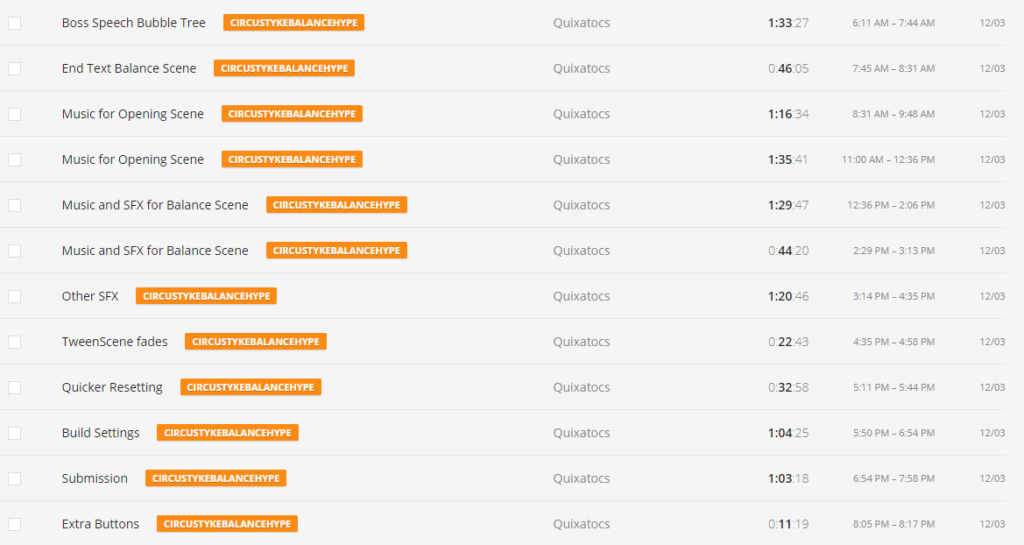 So check out the game over on itch.io : https://quixatocs.itch.io/circus-tyke-balance-hype

And if you are a Ludum Dare 40 participant chuck me a comment and a link to your game over at : https://ldjam.com/events/ludum-dare/40/circus-tyke-balance-hype

Feedback is also welcome here if you prefer 🙂

Now, go see how long you can keep Tyke balancing for!